When we think of a SLR camera, the first thing that comes to mind is a big, heavy camera, expensive and for expert photographers. However, “SLR” only means the camera has a system of mirrors known as pentaprism, which allows us to see through the lens. The Canon EOS 100D/Rebel Sl1 is a good example of a SLR camera that is not big, heavy or expensive.

The Canon Rebel Sl1 was created for the rookie looking for taking the first step towards the DSLR, without having to spend a lot in a heavy, bulky device. It’s really small –so small, actually, that it feels a bit weird at first. Despite looking like a traditional slr camera, the differences between it and other, conventional cameras, become evident quickly. 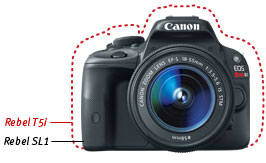 It’s important to note that its size doesn’t mean its performance is inferior to common SLR cameras. It’s designed to achieve the best of results, with user-friendly, explanatory menus to help the beginner take better photos. The manual controls and vast array of lenses from Canon is still there, however; this is a full-fledged SLR camera, despite being lighter and smaller than any other.

Despite being Canon’s most affordable slr camera, its sensor doesn’t suffer, and, in fact, it’s the same one its sister, the Canon Rebel T5i, features: an 18-megapixel CMOS. Remember, however, the megapixels only measure the size of the pictures, not their quality.

Many manufactures use the megapixels as a marketing tool, making the megapixels of a camera sound like a more important characteristic than it really is. With the SL1’s you can take pictures of up to 5.184 x 3.456 pixels. This means you can enlarge them and print high-quality photos (300 DPI) of up to 44 x 29 centimeters. This is more than enough if you consider most pictures we see in our monitors have a Full HD resolution (1920 x 1.080).

Something that is also very important to have in mind about a camera is its light sensitivity. The SL1 features a sensitivity of up to 12.800 ISO, which is high, but still not the highest among Canon’s SLR cameras. It’s also worth remembering that the higher the sensitivity, the higher the noise in the pictures, which can ruin them.

Based on what we’ve seen, we can take pictures without fearing any noise at up to 800 ISO, and with a slight margin of error at 3.200.The noise becomes too noticeable in higher levels, so don’t use it unless absolutely necessary. However, it’s important to note that the 3.200 ISO value becomes very useful in dim-light locations, like outdoors, or when shooting during sunset.

The good performance of the sensor with a high ISO is thanks to the image processing engine. This model features a 14-bit DIGIC 5, which can also be found in the T4i or the T5i. It reduces noise by 75% compared to Canon’s last generation of processors, and it also has an intelligent image stabilizer.

A slr camera capable of video recording offers a lot of possibilities in the hands of a creative person. This camera can adapt to every user, since one can manually adjust pretty much any parameter and function, like the lens.

The Canon EOS 100D may be a camera for beginners, but that doesn’t mean it doesn’t give great results. It can record Full HD video (1.920 x 1.080 pixels). Nowadays, most monitors and TV screens use that resolution, which makes recording at higher resolutions pointless.

The Full HD recording is done at 30 frames per second (fps). It’s commonly considered that 24 fps is the lowest persistence of vision, that is, the number of pictures the human eye has to see in one second for the movement to appear natural to us. So there is no issue in this regard.

It can also record video in HD (1.280 x 720), which increases the speed to 60 frames per second. This may not make the picture better-looking, but allows for slow-motion effects, and therefore more possibilities for creative edition.

The AF CMOS Hybrid Sensor II gives us a constant autofocus when we’re recording video. This way, we can concentrate in other aspects like the light or the movement of the camera. However, it’s possible to switch to a manual focus mode if we’d like. Another detail in the quality of the recording is the audio, which can be enhanced by connecting an external microphone to the camera.

Like we said, the size is the first thing that catches the eye the very moment you lay hands on this camera. It’s really small, so small it can actually seem and feel weird. However, it works like any normal camera. The buttons in the back are exactly the same as the ones found in other Canon cameras. And just like its size, its weight is minimal: merely 400 grams. It’s much smaller and lighter than any other slr camera, which gives the strange feeling that we’re carrying something that should be heavier.

The three-inch screen in the back has a resolution of more than one million pixels. As expected, it’s a touch screen, which can be used to control many aspects and functions of the camera. Using the Live View mode (which displays an image of what we’re seeing through the camera); we can choose the focus point simply touching the screen and then take the picture easily.

Since it’s a camera for beginners, it’s designed to make everything as easy as possible for the user. That’s why it features several different automatic functions and modes, designed to help us take the perfect picture easily. A portrait mode, landscape mode, a mode for taking pictures of near objects and even food are some of the ones this camera features.

The Canon rebel sl1 is a slr camera for beginners, but a lot can be done with it. It features all kind of manual modes for both picture and video modes, and a very nice sensor with a great performance. Also, its size and weight make it easier to handle and carry around than most slr cameras. Despite its specs, the main feature of this camera is still the possibility of having all of Canon’s lenses, the most varied in the market, at our disposal. This is more than the average camera for rookies, it seems Canon decided to make a mid-level miniature camera, so not only beginners may be interested in it.

Its final price will depend on the retailer or store, so the best thing to do is compare and look for the lowest price. Normally, it should be around 649 Euros. The camera comes with a basic 18 – 55 millimeter lens. A logical price for a camera that has decides to reduce its size and weight, without having to sacrifice performance.

Previous Nikon’s upcoming Smartphone?
Next Leaked pictures of the Hasselblad Stellar, a premium version of the Sony RX100

A Quick Guide to buying a suitable memory card for your camera. Card Types: The …