At the end of 2017, the smartphone war is being waged between large phablets. In the absence of the Pixel 2 XL, the war will be waged between the three heavyweight contenders: the Huawei Mate 10 Pro, the Samsung Galaxy Note 8 and the LG V30.

Different approaches to being “borderless”

2017 represents a departure from conventional smartphone design since the major high-end devices have transitioned towards a “borderless” design. Following the trend set by the LG G6 and the Samsung Galaxy S8 at the beginning of the year, the LG V30, Samsung Galaxy Note 8 and Huawei Mate 10 Pro have all decided to adopt this type of design.

There is, however, a major difference in display design between the Galaxy Note 8 – which has a curved display – and the V30 and P10 Pro which have a flat display covered by 2.5D tempered glass. All of these models use high-quality materials. All three are also very prone to showing fingerprints due to the particular material used in their construction. 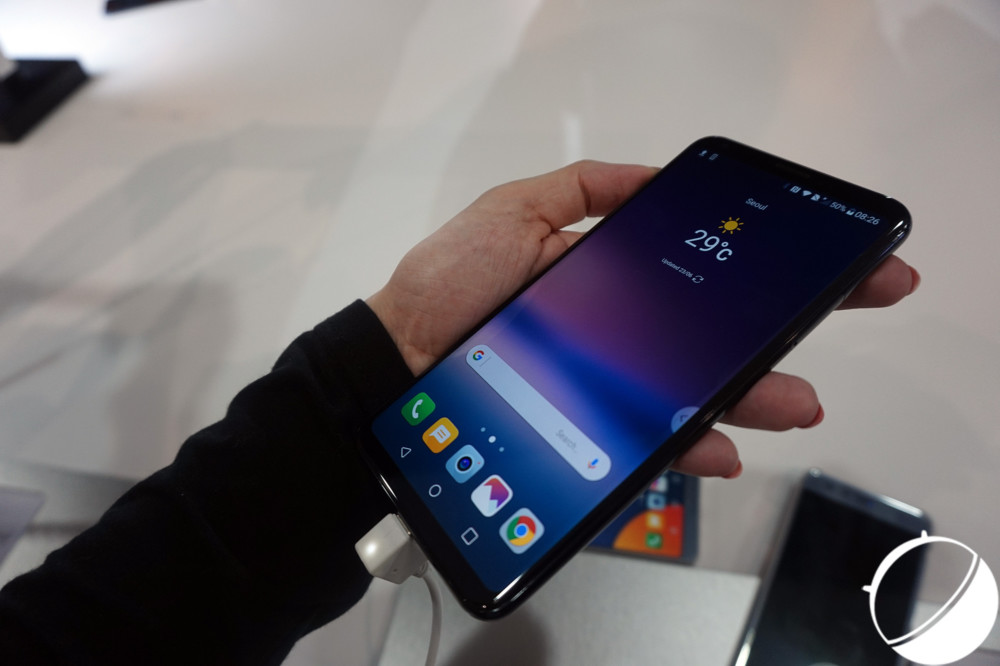 In terms of ergonomics, LG and Huawei outperform their competitor in terms of the fingerprint reader’s placement – in the center of the rear side of the device – which is more accessible than the Galaxy Note 8’s fingerprint reader. Samsung is relying heavily (perhaps too much so) on its other biometric sensors, namely facial and iris recognition.

Despite the slight curvature of the Galaxy Note 8’s display, these three smartphones use very similar display panels. Samsung’s display has an 18.5:9 format display with 2960 x 1440 pixel resolution whereas LG opted for an 18:9 format display with 2880 x 1440 pixel resolution. It is, of course, a matter of personal preference and of software integration, but it has to be said that LG’s “squares” layout is very ingenious, especially when using the camera – an advantage it has over its two rivals.

Despite the difference in resolution, LG’s display has better definition (537 PPP versus 522 PPP) since its diagonal dimension is slightly smaller – however, this difference is negligible.

Huawei, for its part, preferred to focus on battery autonomy and as a result chose to equip its Mate 10 Pro with a Full HD+ (2160 x 1080 pixel) display – which translates into a pixel density of 402 PPP. While this is lower than that of its competitors’, it remains acceptable for daily use. 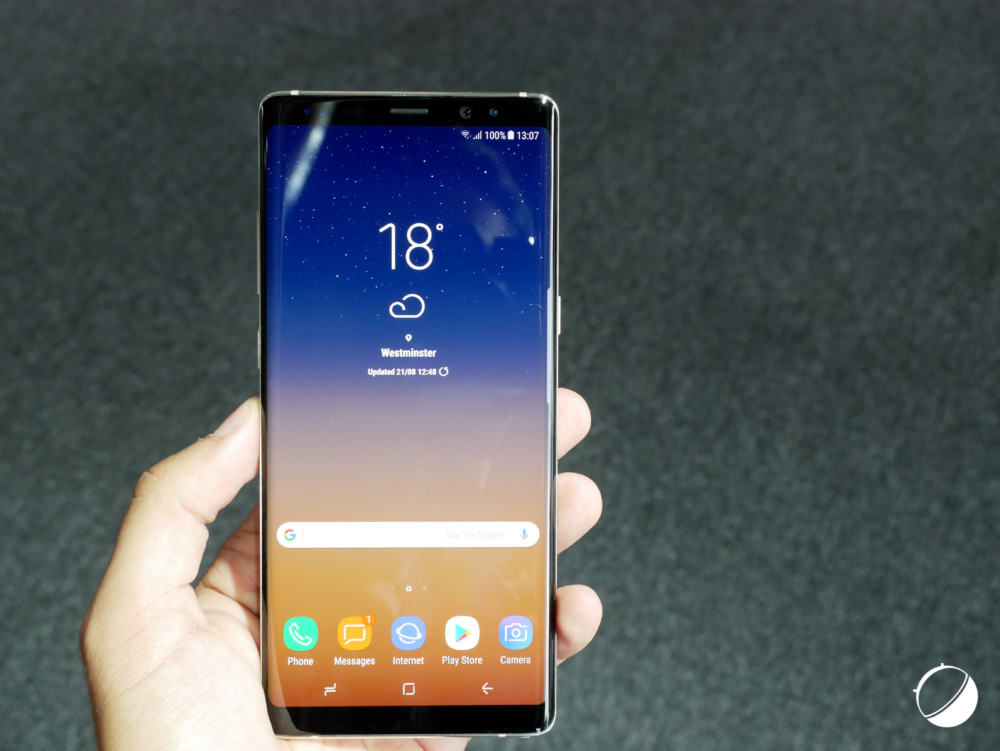 LG and Samsung are both reputed for their OLED display panels, but it is important to note that for the first time in a very long time, LG has chosen to equip one of its smartphones with a display other than an LCD display. If you purchase the V30, you will, therefore, need to verify that the display has been properly calibrated – although this is not a major concern. Despite not manufacturing its own display panels, Huawei has also incorporated an OLED into its Mate 10 Pro, after having first performed a few tests on less high-profile devices (Mate S, P9 Plus…).

While Samsung took the lead over LG at the beginning of the year with the integration of its 10 nm etching Exynos 8895 processor into its devices – while its competitor was still using the previous generation of processors – at the end of 2017, these two rivals are once again on an equal footing. As a matter of fact, both of these phablets are using a processor of equivalent power: on the one hand the Exynos 8895 and the Snapdragon 835 on the other.

Both of these SoCs are now well-established and have proven themselves to be reliable. The difference between these two devices has more to do with RAM and the management of multitasking. The LG V30 “only” has 4 GB of RAM versus the Samsung Galaxy Note 8’s 6 GB. A difference which could prove significant in the long run.

The Huawei Mate 10 Pro is the first smartphone to make use of the Kirin 970 processor. Also having 10 nm etching, it has 4 Cortex-A73 cores as well as 4 Cortex-A53 cores – an architecture similar to that of its competitors’. Furthermore, HiSilicon does, in general, manage to obtain better gaming performance thanks to its particularly fine GPU optimization (in this particular case, a Mali-G71 MP20).

The latest creation by this Chinese manufacturer also comes equipped with 6 GB of RAM, which should allow it to have good multitasking performance.

You’ve either got a stylus or you don’t

Both the LG V30 and the Samsung Galaxy Note 8 come with Android 7.1 Nougat installed whereas Huawei offers a native Android 8.0 Oreo installation. It is also worth noting that LG is generally faster when it comes to releasing major updates, but that Samsung does a better job at releasing security updates. We will have to wait and see if this trend continues with the Android 8.0 Oreo OS.

In terms of interface, each manufacturer has made its own modifications to the operating system, respectively named: “LG UX”, “Samsung Experience” and “Emotion UI”. It is a matter of personal taste, but we find Samsung’s interface to be less messy and to have a better layout. We will have wait to see if the innovations introduced by EMUI 8.0 will be convincing or not. 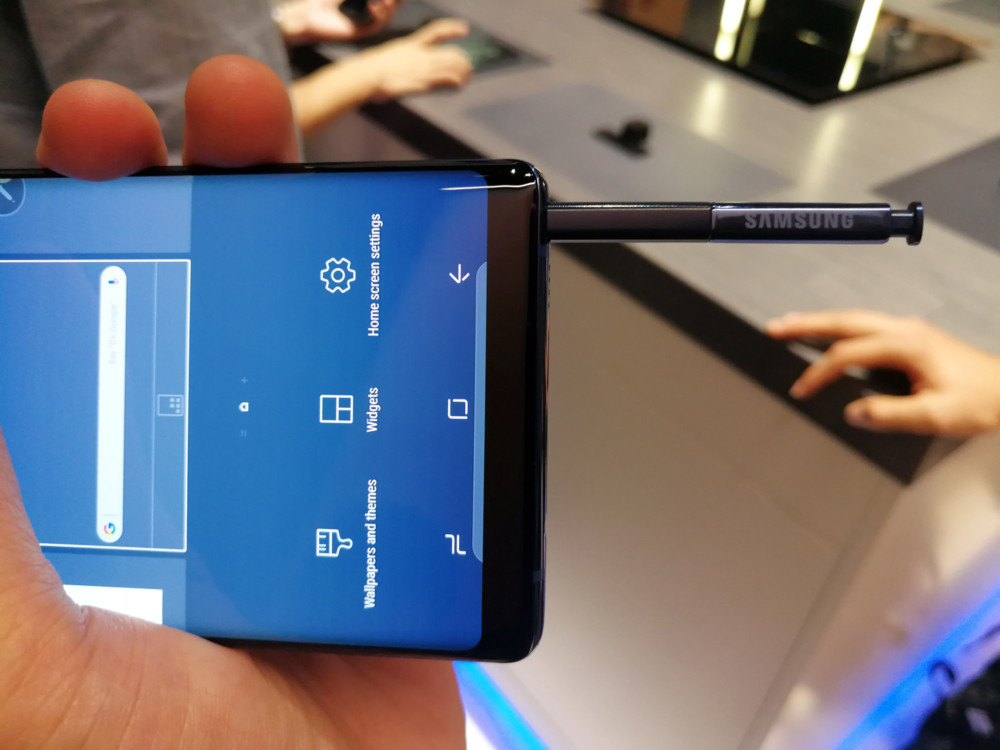 The main advantage of Samsung’s device over those of its competitors is the S Pen, its famous stylus. It must be said that this year, the S Pen is more interesting than ever before. However, Moleskin intends to introduce a stylus accessory for the Mate 10 Pro which would be able to make use of the smartphone’s artificial intelligence to automatically digitize written text. This accessory is however expected to retail for around 299 euros.

Lastly, while the Google Assistant is present on both devices, Samsung is promoting Bixby, its own personal assistant, which is still only available in English in France.

Samsung, LG, and Huawei all have an excellent reputation when it comes to mobile photography. While Samsung fell somewhat behind with the Galaxy S8, the Galaxy Note 8 performs much better and, for the first time in one of this Korean manufacturer’s products, it incorporates a dual photo module.

The V30 essentially relies on the 16 megapixel Sony IMX351 sensor with 1 µm photosites coupled with a lens having a maximum aperture opening of f/1.6. For its part, the Galaxy Note 8’s primary sensor has larger photosites (1.4 µm) – since it has lower definition (12 megapixels) – which are capable of capturing more light; the maximum aperture opening of its lens is f/1.7. These two cameras should, therefore, be very similar in terms of performance. 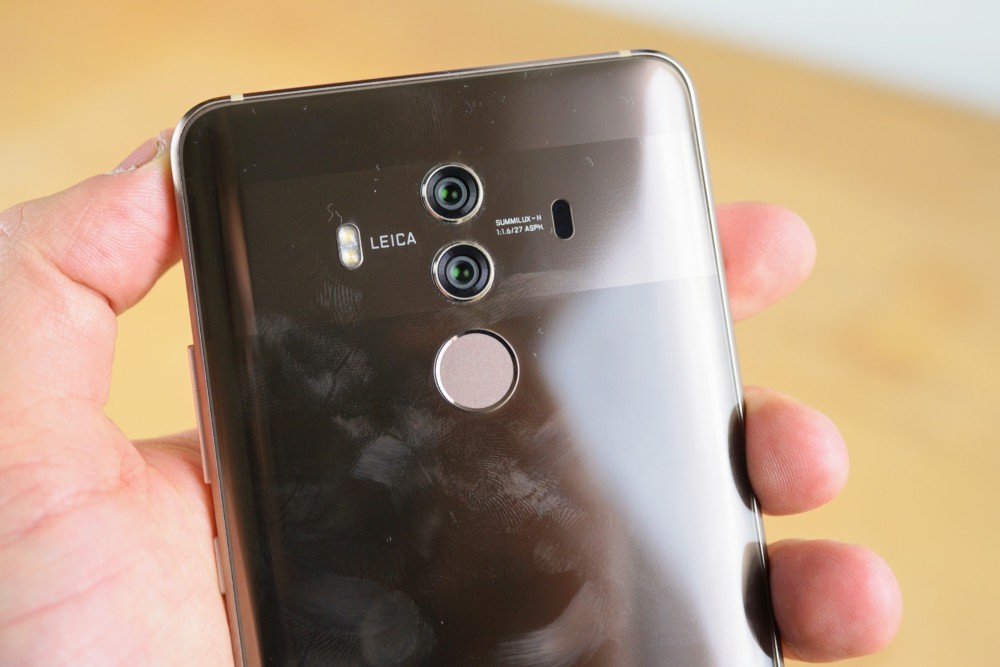 The Mate 10 Pro, for its part, has a dual sensor configuration (20 and 12 megapixels) and its two lenses have a maximum aperture opening of f/1.6. The first sensor is monochrome, the second RGB, and once again Leica had a hand in their conception. While there is no available data regarding the size of these sensors’ photosites, the manufacturer has stressed the fact that its artificial intelligence chip should enhance the software image processing performance of its device.

While Samsung has decided to follow the “Portrait” path by using its second sensor to measure depth of field and to add a bokeh effect to images (something that some people do digitally without the need for a second photo module), LG continues to use its dual sensor system to offer radically different focal points. Huawei combines data from its two sensors to offer more precise photos with better contrast for everyday situations in addition to being able to provide a satisfactory bokeh effect.

The Galaxy Note 8 offers 45 and 77° FOVs whereas LG offers 71 and 120°. Once again it is a question of personal preference, but it must be said that LG’s solution is more pragmatic. We still don’t know what Field Of View the Mate 10 Pro offers, but we found the dual sensor system used on the P10 Plus earlier this year to be quite impressive.

Autonomy: Huawei has the upper hand

With their very energy efficient 10 nm etching processors and OLED displays – which do not require much power to display black pixels – these three smartphones have very good battery autonomy. Samsung and LG use a 3300 mAh battery to power their devices, but Huawei has integrated a higher capacity battery into its device – 4000 mAh. Add to this the fact that the Galaxy Note 8’s is a little bit larger and it is easy to understand why the V30 and the Mate 10 Pro should have better battery autonomy.

However, this reasoning is only valid if we assume that the software of all three of these smartphones has been configured in the same way, which is not necessarily the case. We will, therefore, have to wait until we are able to fully test the capabilities of these devices in order to determine which one really has the best performance. 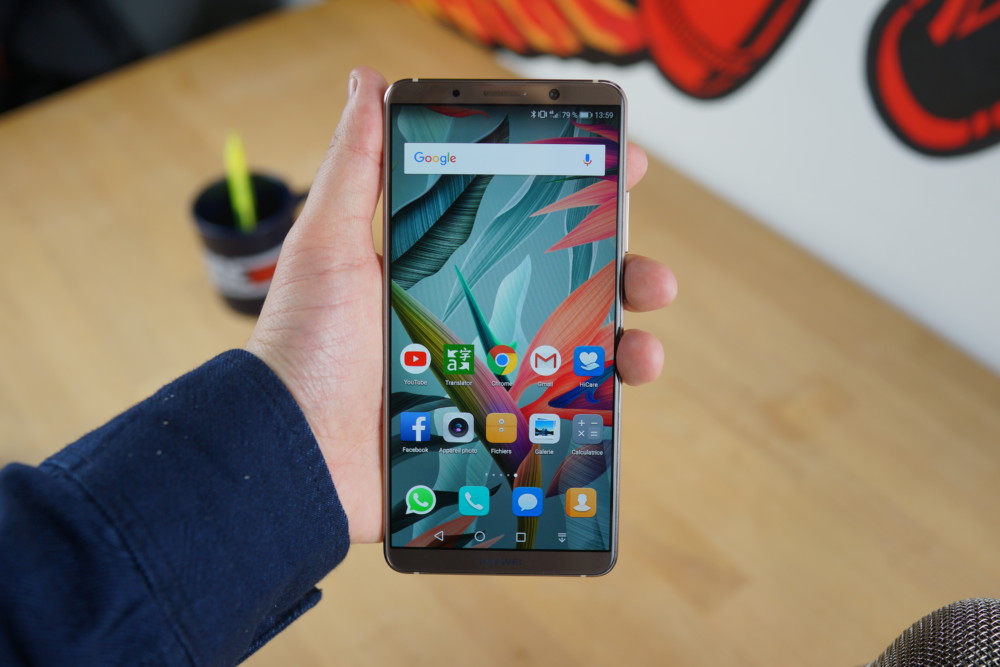 Which one should you choose?

In addition to all of their now conventional features, these devices have introduced some innovations such as the “Dock” mode available on the Samsung and Huawei devices – not available on the V30 – as well as the Mate 10 Pro’s artificial intelligence and Android 8.0 Oreo OS. While these two elements are not reason enough for choosing this particular phone over either of the others, if you are hesitating between these three models, these elements could be the deciding factor.

On paper, all three of these smartphones are very good, with Samsung and LG having slightly better software and LG having slightly better ergonomics. It is however still hard to choose between them without having been able to do in-depth testing of some of their key features such as battery autonomy and camera performance. We will, however, release complete test results as soon as possible. 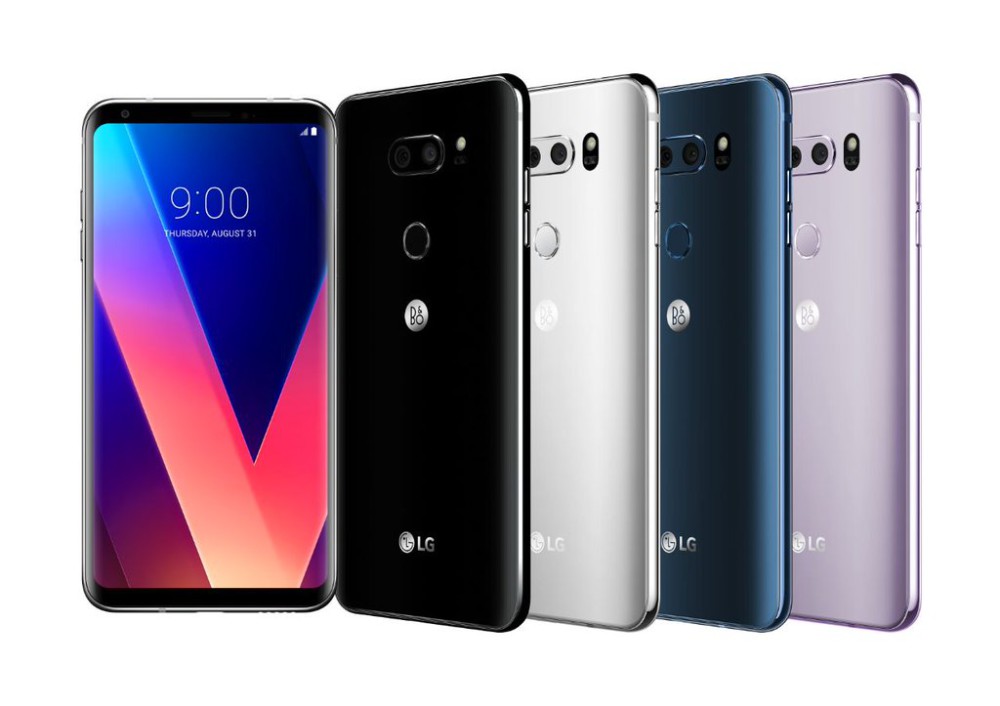 Nevertheless, another element will necessarily influence your decision: price. Being sold for 1009 euros, the Galaxy Note 8 is very expensive, and even though Samsung’s products may be very well built, the V30 and the Mate 10 Pro are respectively being sold for around 900 and 800 dollars.

It is worth noting however that Samsung’s phablet is already available while you will need to wait until November for the Huawei Mate 10 Pro to be released or December for LG to release its V30.

Smartphones with optical zoom: this is the trick behind them

Smartphones with optical zoom work with a simple trick. What it should not be used …