If you are interested in digital photography (which is most likely the case if you are reading this article), then you will probably already have heard the term RGB being used. We would like to give a brief explanation of what these 3 letters mean and what importance they have for you as a photographer.

If you have never heard of RGB, simply open a photo in your favorite image editing program and look at the title bar: you will see these three letters somewhere among the text. What does this mean?

Let’s begin with a definition: RGB corresponds to the additive synthesis of the Red, Green, and Blue colors in order to create all of the various color nuances shown by your display.

To better understand what this jargon means, let’s look at a practical example.

If you mix cyan and yellow paint together on a piece of paper, you will get the color green. This principle is called subtractive synthesis. It gets its name from the fact that a part of the light spectrum which makes up visible light (doesn’t that bring back memories from high school?) is absorbed by the paint mixture. In fact, what we you seeing are the remaining light waves – those which were not subtracted from the light spectrum, those which are being reflected back to you by the paint mixture.

In our example, the yellow paint absorbs the light waves corresponding to the color blue (its complimentary color) and the cyan paint is absorbing the waves for magenta. The result is that, once the two colors of paint have been mixed, the only light wave which has not been absorbed is the one corresponding to the color green – which is why the mixture appears green to you.

Well, I hope you are still following me…

On a display however, everything is different since in this case it is not visible light being emitted by the sun which is determining colors by reflecting off of surfaces, but rather a source of artificial light from within the display (LED for example). In this case the principle of subtractive synthesis does not come into play at all. Consequently, we are dealing with a completely different color representation system which is the exact opposite of subtractive synthesis. I bet you can guess what it’s called…

In the case of additive synthesis, if I mix red and blue together, I will not obtain violet as I would were I mixing paint, but rather magenta. Let me explain why.

As I mentioned before, a display does not behave in the way a piece of blank paper does, it does not reflect light. Instead a display emits light.

Note: to make it easier for me to explain the principle of additive synthesis, I will be basing myself on a technology which is almost no longer in use: CRT displays (you know, those bulky displays from the end of the last century).

As you are surely already aware, a display is composed of pixels. On a CRT display (one of those old displays), each pixel is made up of three luminous points called luminophores. Each luminophore is able to project a different color: there is one for Red, another for Green and a third one for Blue.

The intensity of these luminophores is variable and the intensity can have one of 256 possible values. At value 0, the luminophore is turned off; at value 255, it is at its brightest.

If no luminophore is turned on, that is to say Red = 0, Green = 0, and Blue = 0, the no color will be visible and the display will appear black.

On the contrary, if all of the luminophores are at their brightest, that is to say Red = 255, Green = 255 and Blue = 255, the display will appear white. In this case, the white light results from the addition of the three colors – hence the name additive synthesis.

It is therefore by the addition of these three sources of colored light and by the variation of their respective intensities that all of the various color nuances will be displayed.

The process of additive synthesis can easily be represented by your favorite image editing software (so long as it is capable of handling layers).

Simply create a new document, draw a circle with the selection tool and fill the area with the color red (using the paint bucket) by choosing the value 255 for Red, 0 for Blue and Green. Create blue and green circles by following the same procedure (put each one on a different layer), then change the blending mode of the topmost layer by setting it to difference. By partially superimposing these three colored circles, you will be able to witness the process of additive synthesis in action.

Since I’m in a such a good mood today, I already did the work for you. All you have to do is to download this TIFF file 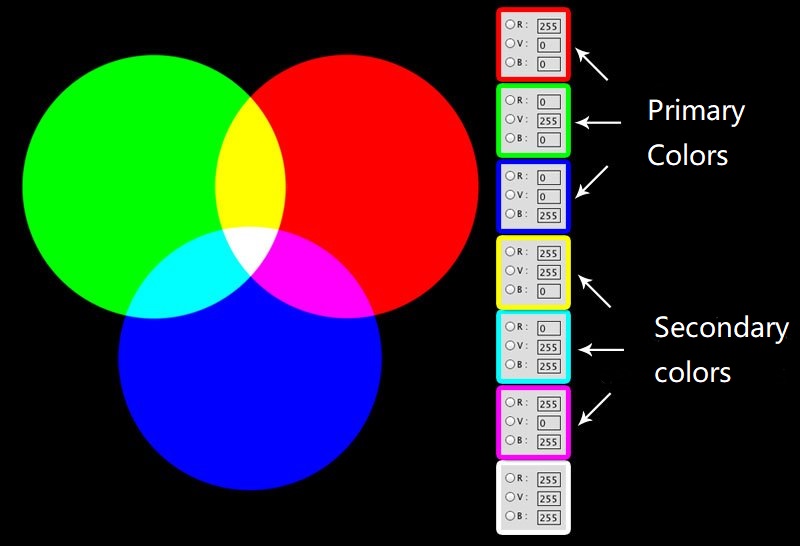 All digital devices base themselves on the principle of additive synthesis for the reproduction of color (displays, cameras, scanners).

These 16.7 million colors represent what is called a color space. Unfortunately, in reality, the devices we use are incapable of displaying the totality of these colors. As a result, more restricted color spaces have been created. The most well know are sRGB and Adobe RGB (Adobe seems to be everywhere you look).

It is possible to represent a color space on a diagram which allows you to visualize and to compare all of the colors contained in a color space. In the case of sRGB and Adobe RGB, this is what the diagram looks like (source: Wikipedia): 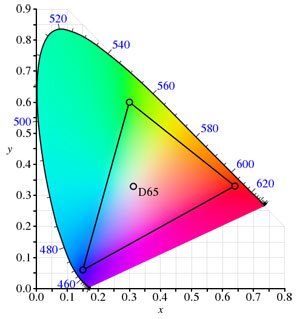 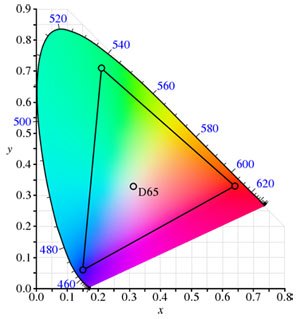 The rounded zone filled in with color represents the totality of the color spectrum visible to the human eye. Inside of it, the RGB color spaces are indicated by a triangle.

You can clearly see that the Adobe RGB color space is larger than the sRGB space (especially in the greens and blues).

A number of digital cameras and certain high-end displays allow their users to work within both color spaces. As a result, we need to ask ourselves:

Is it better to use sRGB or Adobe RGB?

It can be tempting to desire working with the Adobe RGB color space since the number of colors it is capable of displaying is certainly higher. However, 99.9% of the people who are reading this article should be using the sRGB color space. Let me tell you why.

Tip: if the first character of your image file’s name is preceded by an underscore “_”, that means that it was taken by your camera using the Adobe RGB color space.

That’s it! I hope things are a little clearer for you now.

Previous P, S, A, M, Auto: what shooting mode to choose and 3 exercises to better understand why
Next Datacolor vs. X-Rite Monitor Calibrator: what are they used for and how to choose?

A Quick Guide to buying a suitable memory card for your camera. Card Types: The …